When Does a Baby Become a Toddler? 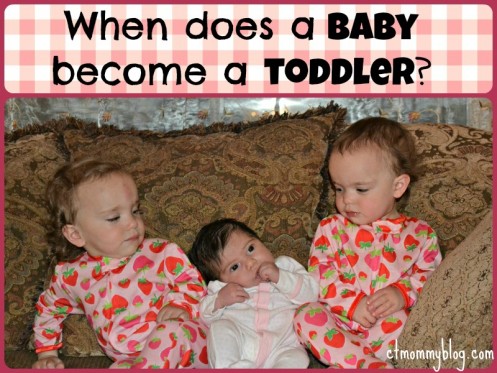 I look at my girls and still think they are babies. Then I look at my friend’s newborns and realize that it’s been a long time since I had a helpless little baby. We used to cheer when the girls would turn their heads during tummy time. Now, I have two crazy little monkeys who are marching around the house and climbing on and off the couch. When did my girls stop being babies and start being toddlers? 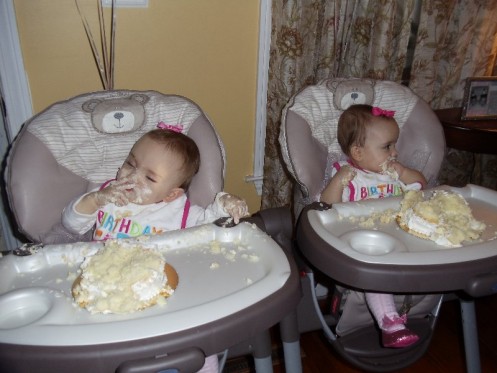 The first birthday was a huge milestone.  Our tiny little peanuts had beat the odds and were as healthy as could be.  Chris and I had survived our first year of parenting twins! I should have been jumping for joy, but instead I cried for the two weeks leading up to the girls’ first birthday. Just the thought of my tiny little ladies becoming “one-year-olds” made me turn into a blubbering mess. I tried to explain it to Chris, but he just reminded me how far we had come from those first weeks in the NICU, and how blessed we were to have two healthy beautiful girls. Of course I knew he was right, but it didn’t make things any easier. In a way, I think I was mourning the loss of their “baby-ness” as they entered into the next stage of being a toddler. I knew that we would be entering a whole new world of independence and leaving their baby days behind. 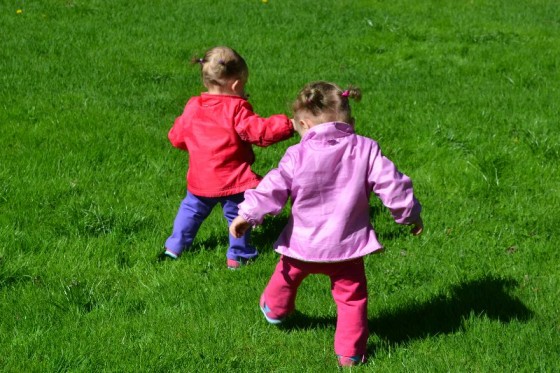 Juliette and Olivia went from crawling to motoring around in a blur.

Learning how to walk seems like the last big physical milestone for a baby to accomplish. As each of my girls took their first steps, they were symbolically walking into toddlerhood. As I cheered them on with each wobbly movement I knew that the future was full of running, jumping, and leaping.  Maybe I was nervous that all those new steps were going to be away from me, and not toward me! 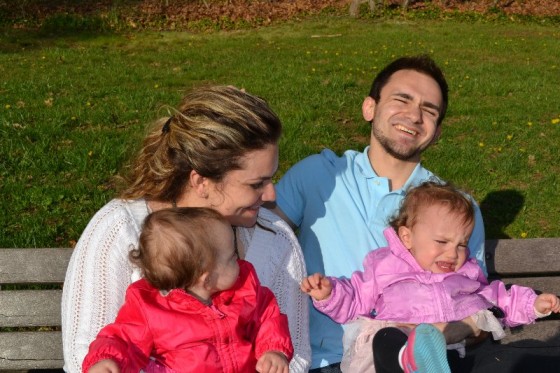 Juliette has made Toddler Tantrums a part of our daily routine.

Whoever created the phrase “terrible twos” must have never lived in a house with a one-year-old, and certainly not two one-year-olds!  In our house the terrible ones (as I will now refer to it) started shortly after the first birthday.  Something overcame our sweet angelic babies, and made them into miserable irrational little creatures.  Okay, I might be being a bit dramatic but I believe the terrible ones are so much worse than the cries of a newborn.  In the beginning there were a few reasons why the baby was crying — wet, hungry, sleepy, overstimulated.  I could run down the list and usually find the cause, but with the terrible ones everything makes them cry — put on their shoes (cry!), take off their shoes (cry!), wipe their nose because they are crying (cry louder!).  Tantrums definitely separate babies from toddlers, but not in a good way. 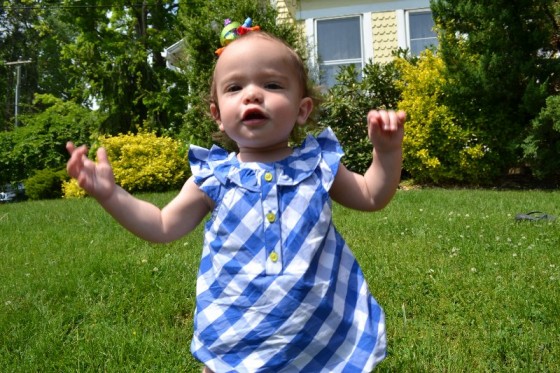 Olivia is bursting with language and adding new words all the time.

Speech has recently exploded in our house.  The girls are 17 months old now and picking up new words every week.  I watch in awe as they label things in their environment and interact with us in a way that has never happened before.  It seems like only yesterday that we held them for the first time, and now they are saying hi and bye to us.  Talking definitely separates a baby from a child.  I know we are only at the beginning of filling our house with conversations, but this is one milestone I’m looking forward to developing. 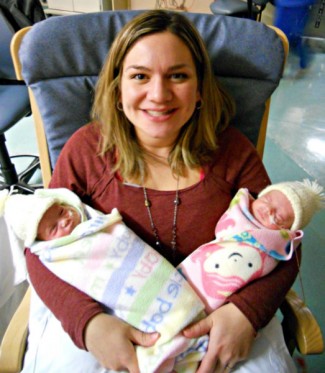 I quickly fell in love with my baby girls.

Before I had babies of my own I was never really a fan of other people’s babies.  All the head holding, soothing, and cradling you have to do for a newborn seemed intimidating.  Something changed when my girls were born.  My motherly instinct kicked in and I knew I could handle it.  I remember telling people (and meaning it) that I was really surprised at how much I liked the newborn stage.  Having babies of my own has changed the way I view all babies.

As I slowly come to grips with the reality that my babies have become toddlers, it shines light on the fact that I’m not done having babies in my life.   It might simply mean I am going to take advantage of snuggling all of my friends new babies a little more or it might mean having the next baby “talk” in our house sooner rather than later.  Whatever happens, I know that I need to slow down and enjoy what makes toddlers so special.