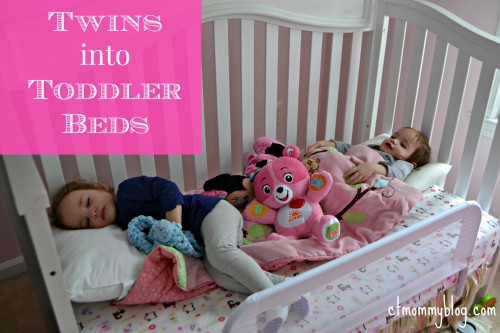 When my twins were about 20 months old I walked into the girls’ room to find Juliette straddling the top rails of her crib.  Doing what any good parent would do, I called in my husband to be a witness and ran into the next room to grab my phone to document the milestone. Being a first time parent I had no idea that my sweet little girl was that flexible or coordinated.  I felt like all my mommy friends that had come before me and my weekly Baby Center email had all failed me. No one had warned me that I should be preparing for the transition into a toddler bed. 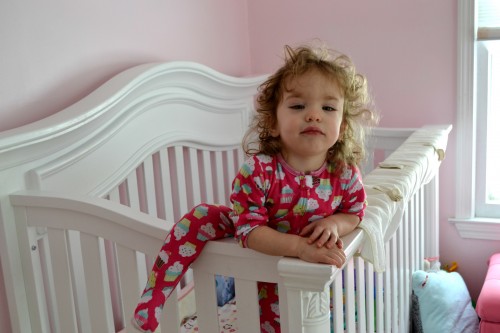 I quickly began my Google research on keeping toddlers from climbing out of their crib.  Most things said that once kids start climbing out they won’t stop.  It’s safest to transition them to a toddler bed.  I didn’t feel like my girls were quite ready for a toddler bed.  Or maybe that was me, I wasn’t ready for my twins to have the freedom that comes with toddler beds.  So I used the sleepsack as an alternative. In theory the sleepsack prevents kids from spreading their legs wide enough to climb out of the crib.  The sleepsack worked great with Juliette, but I soon came to learn that our tiny Olivia is a little gymnast. She quickly figured out a way to throw her leg over the crib.

The turning point came when I walked into the girls’ room one morning and found them in the same crib. I started to second guess myself. Was my pregnancy brain working against me and had allowed me to forget putting them in the same crib? I assured myself that I wasn’t that far gone…yet. Instead I realized I have some serious toddler ninjas on my hands who were capable of scaling their cribs. I moved them back to their individual cribs, but this time I waited. I waited with my camera phone in hand to catch them in the act. I was shocked by what I saw.

I knew at this point that something had to be done for their safety and my sanity. Our solution was to turn the the crib around so the high back faced out. This solution worked great. The girls only had one way out of their cribs and never attempted to climb out… and it worked for almost 4 months! And then came the week before their brother was born. 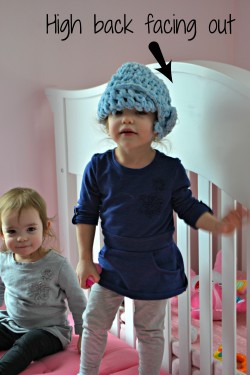 They say that you shouldn’t start any transitions before a new baby is due to arrive. They don’t have twin toddlers who jumped into their parents’ bed at 6 am after managing to climb out of their cribs. There wasn’t time to read books about moving into a big girl bed or time to pick out big girl bedding. We only had a few days before Andrew was due and needed to move quickly.

The girls have convertible cribs that turn into toddler beds and then into full size beds. It was fairly simple to transition the convertible crib into a toddler bed, at least it looked easy since I parked my very pregnant booty on the floor and supervised.  Thankfully I had already bought bed rails in anticipation of this big day. Once the front piece was removed the girls partied around their new big girl bed and shrieked with glee. 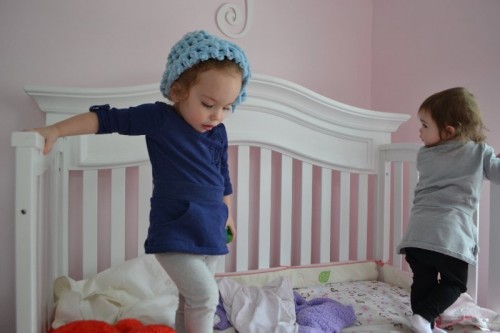 We tried to make their new big girl beds a really big deal, or as big of a deal as a few hours notice will give you. I finally got to pull out the crib skirts and quilts that had been hiding away in the closet. Both girls also got to pick out a new pillow.  With all the new excitement the girls fell right to sleep…together. 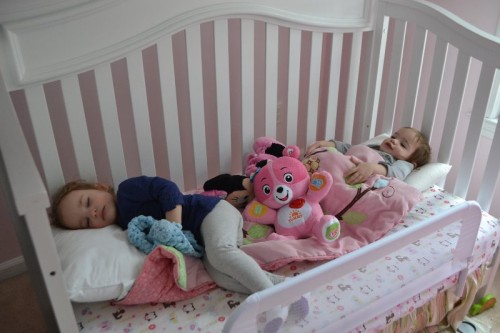