Making the Best of a Bad Vacation

We just got back from 12 days in Florida.  Chris had a business conference in Disney World so we decided to plan our family vacation around his meeting.  We spent 6 nights at Animal Kingdom Lodge Kidani Village and then drove 2 hours down to spend 6 nights at Disney’s Vero Beach Resort. 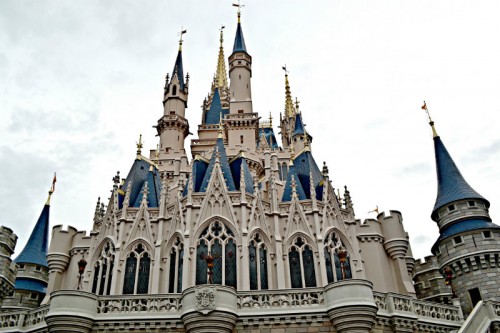 We spent a lot of time researching where to stay, what to do with the girls in Disney, and the most anxiety provoking of them all, how to fly with toddlers.  We brought the girls to the Magic Kingdom for one day last year as part of our Disney Cruise but they weren’t mobile yet, and certainly weren’t having their toddler tantrums.  This year I needed a lot more preparation and tricks up my sleeve. 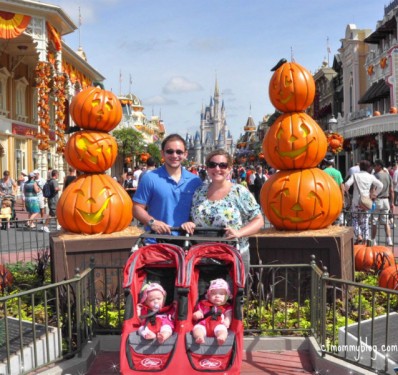 This trip was also extra special because we got to spend it with my mother-in-law and sister-in-law.  Chris was in his conference 3 full days and I knew that I would need extra help with the girls.  It was the first time traveling together and the first time for them in Disney in almost 25 years!  I know that the girls are still too young to remember this trip, but the pictures and stories will last forever. 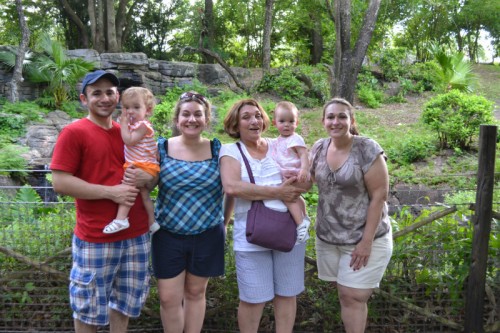 Animal Kingdom with the whole family

The trip started off promising with our first day at the Magic Kingdom.  We arrived at the park around lunch time and stayed for the Electrical Parade after sunset.  They have expanded the Fantasyland area of the park since we were there last August so I was really excited to see the new attractions, including new Dumbo, Little Mermaid, and Beauty and the Beast attractions. They are also building a 7 Dwarfs roller coaster that is still  under construction, but will surely be a lot of fun when it’s completed. 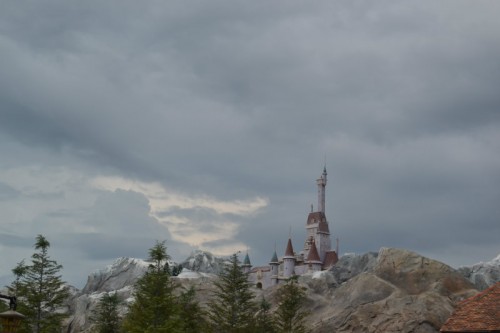 New Beauty and The Beast Castle

On our second day we stayed around the resort.  I specifically picked the Animal Kingdom Lodge because we could have a view of the animals from our balcony.  I knew that I would enjoy sitting outside while the girls were napping.  We paid extra to have a villa (one bedroom, living room, kitchen, 2 baths) so we didn’t have to tiptoe around when the girls were sleeping.  It was well worth the extra cost.  There were also a lot of special viewing areas around the resort to see the animals including campfires and night vision goggles to see the animals once it got dark. 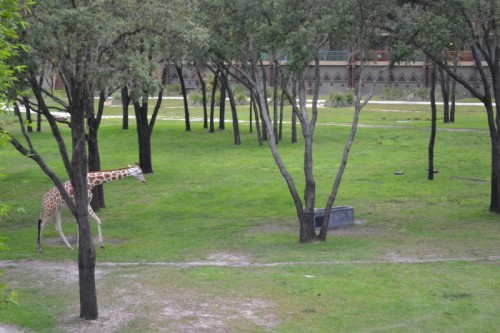 A giraffe outside our balcony

The pool and splash zone area at Animal Kingdom’s Kidani Village was the best I’ve seen for small children.  There were gentle sprinkles sprouting from the ground, large gushes of water falling from buckets above, and a curved water slide.  The girls loved it!  The pool was beach entry, meaning you walk into it like you would the ocean — also great for little kids. 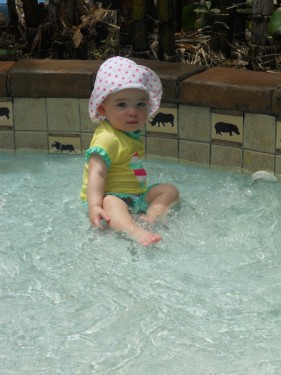 Olivia having fun in the splash zone

By our third day, the real fun had begun when Tropical Storm Andrea rolled into town.  It rained on and off for the better part of two days.  Despite the rain, we still decided to head to the parks and make the best of our time there.  My theory was that memories weren’t going to be made staring at each other in the hotel room.  We headed to the gift shop to buy ponchos before catching a bus to Epcot  (Helpful Tip: Bring along ponchos from the dollar store in your luggage when you visit Disney.  They will run you $8.50 once in the park.). 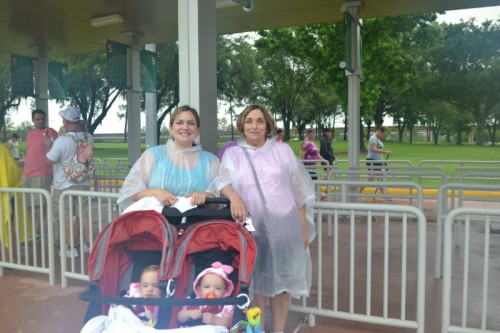 Rocking our ponchos at Epcot

We started our day with Juliette vomiting all over herself, me, and the shuttle to Epcot.  We thought her stomach was just upset from something she ate and the bumpiness of the bus and decided to head to the park anyway.  The weather was still not the best but Epcot was the perfect park to visit in the rain.  Most of the rides and small kid attractions are inside.  Thankfully the weather had cleared up by the afternoon and we were able to dry off while heading touring the World Showcase.  We went to Hollywood Studios in the evening to see the Fantasmic Show — my favorite night show at Disney World. 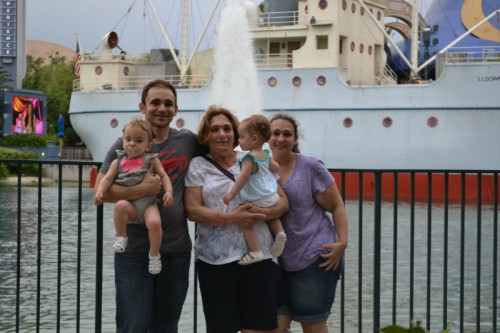 On our last day together we decided to visit Animal Kingdom.  Again Juliette got sick.  This time in the entrance to the park.  I knew she was not feeling well so I decided to take her back to the room to rest.  Our room was half a mile from the hotel lobby (not exaggerating), so it was no fun carrying a sick toddler all the way home.  After her nap she appeared to perk up so we took the 1/2 mile walk back to the lobby and got on a bus to Animal Kingdom.  Chris had my park ticket and was supposed to meet us at the gate.  Apparently Juliette was determined to make her way into the park on her own and ran under the roped off section.  I chased her and then was chased myself by Disney security.  Apparently they thought I was trying to sneak into the park in a very non-discrete way.  Finally we were all reunited and had dinner at the Rainforest Café.  I was a little nervous that the girls would get scared of the animals and noises but they quickly got used to it. 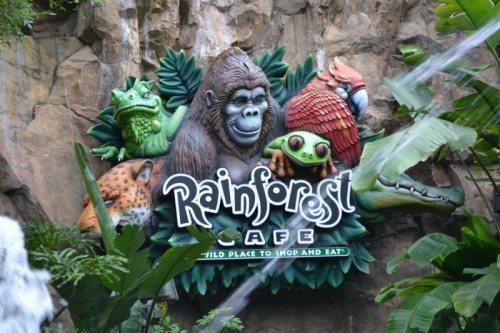 After our stay at Animal Kingdom, and saying our goodbye’s to Chris’ mom and sister as they headed back home to CT, we packed the girls in a rental car and headed to Vero Beach, Florida.  Disney World had been a little hectic with the weather and Juliette not feeling well so we were really excited to get to the beach and relax for the next few days.  Unfortunately, relaxing was the last thing that was going to happen.

On our first night in Vero Beach Juliette’s crying was uncontrollable.  We called our pediatrician in the middle of the night and he suggested we go to  the hospital to make sure she wasn’t dehydrated.  While waiting to be seen in the ER Juliette got sick all over Chris’ shirt and he had to wear a random stranger’s shirt.  After being in the hospital for 6 hours the doctor came in to tell us that she had an ear infection.  Really, an ear infection with diarrhea and vomiting?  Turns out she gave us the diagnosis for the kid down the hall.  We finally got discharged from the ER and picked up some prescribed meds for Juliette on the way back to the resort. Perhaps we could salvage the week after all?

Nope. The rest of the week involved everyone coming down with some level of the stomach bug.  There were more bodily fluids sprinkled around our hotel room than I care to admit.

We really attempted to make the best of the situation by venturing outside even if it was only for 20 minutes.  We played in the sand and collected shells. 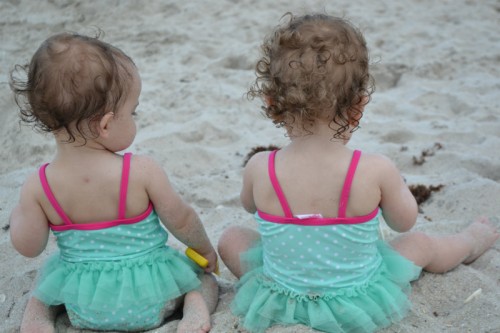 The girls loved playing in the sand and collecting shells

We even checked out the dozens of sea turtle nests that were laid while we were staying at the resort. 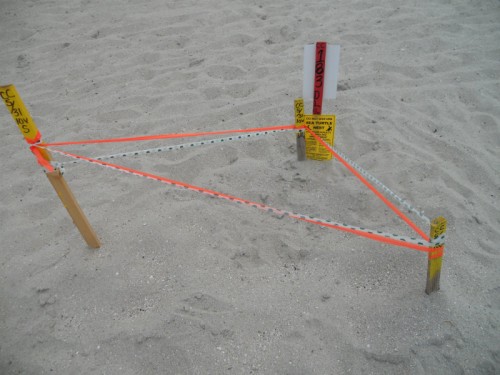 By the end of the trip we were all ready to come home.  We had been away for a long time and dealing with sick babies when you’re so far away from home is no fun for anyone.  We survived the flight back to CT but got one more kick to the gut… on our walk to baggage claim, Olivia got sick and threw up in the middle of the airport. At this point we were in full survival mode and just cleaned her up, told security about the mess, got our bags, and continued our journey home to familiarity and sanctuary.

Despite the kids’ illness we did get a couple of happy moments as a family. We would recommend staying at either resort, and think that one day we would love to come back. Next time we’ll be sure to leave any stomach bug behind!