Could it be a Night Terror?

My girls have always been really great sleepers.  They take a 3 hour nap in the late morning and sleep 12 hours straight at night with very little interruption.  I know that we’ve lucked out in the sleep department.  I’ve even written about getting twins to sleep through the night. 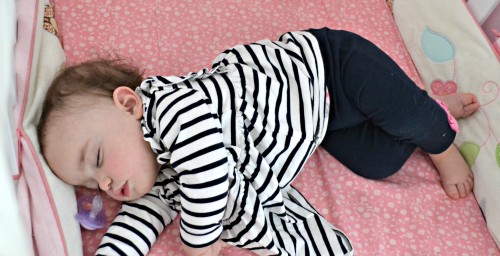 Where has my sweet sleeping baby gone?

But now something has changed with Olivia’s sleeping pattern, and I don’t like it.  For the last 4-5 nights she has been waking up around 11pm screaming.  This happens several times throughout the night until I’m so exhausted that I just let her cry herself to sleep.  Now, this isn’t the typical “I woke up and lost my pacifier” kind of cry.  No, this is a full on scream, complete with hitting and thrashing around in her crib.

When it first happened my instinct was to do what we have always done when she wakes up in the night– and rub her back, but it didn’t work.  She resisted being held and started waving her hands to bat me away.  Thinking that maybe she had a new tooth coming in I gave her Tylenol, but that didn’t help either.

In our house we use the phrase “reset” whenever a baby is off of their typical routine and we need to get them back on track.  For example, if we were out during the day and they missed a nap.  We start our typical routine over or “reset” the clock.  It might mean that they have a snack, play for a few minutes then go in their crib.  It might also mean that they have some quiet time with Mom and Dad at night before going back in their room to sleep.  It depends on the situation, but it often works.  So I tried hitting “reset” and bringing her into our room to calm down and re-adjust, but she only seemed to be more irritated.  Her personality was completely different than the sweet little girl that I know her to be.  She was screaming and throwing her body around.  When I offered her pacifier (her favorite thing in the world) she threw it out of my hands.  She wasn’t making eye contact with me and seemed asleep, but with her eyes open.

Olivia has always had a more difficult time than Juliette.  When she was only a few hours old she needed to be intubated because it was taking extra effort for her to breathe.  While in the NICU it took her longer to learn how to eat and come home than Juliette.  Once she finally came home she started having reflux.  We believe that having more challenges in her first few months caused her to be more attached to us.  Even now that she is completely healthy she is still shy and looks to us for reassurance, while Juliette walks off and conquers the world independently.  Their personalities are different, and that’s okay.  So that’s why it comes as such a surprise that our usual love bug doesn’t even want to be held or comforted.

Dazed and exhausted I went to my best mommy friend, Google, for some advice.  I read about sleep disturbances in young children and learned all about night terrors.  Just the word terror was alarming.

Here is Baby Center’s definition of a night terror:

These mysterious disturbances happen during deep, non-dreaming sleep. A child in this state will cry, whimper, flail, and even bolt out of bed. Though his eyes may be wide open, he’s not awake and isn’t aware of your presence.

Night terrors occur in 3 to 6 percent of young children. They can start as early as 18 months, but typically occur in children beginning at age 4 or 5.

She seems to fit the definition.  She is 18-months-old, crying, and flailing around.  Even though her eyes are open, she doesn’t seem to be aware of me and doesn’t want to be comforted.

Just so I didn’t get all of my information from the internet, I decided to make a call to our pediatrician and ask for his opinion.  He said that night terrors usually occur in older children and that they don’t happen every night.  But he did say that being unaware and unable to be soothed sounds more like a night terror.  I have noticed that she has a bit of a runny nose, and he said that sometimes extra fluid builds up causing pain, so we might want to check it out if it continues.  However, she is fine during the day and at naptime. We’re just going to wait and see if she continues to wake up in the night then we might bring her in to get her ears checked.

So the mystery remains.  Is this something temporary like a new tooth or a developing cold?  Or could it be something more serious like a night terror?  In the meantime, I’m just going to make sure she gets plenty of rest during the day.  I’m really hoping that I get my great sleeping girl back and we can put these past few nights to bed.