Queen Elsa brought the snow to the 43rd annual WinterFest at Lyman Orchards in Middlefield, CT. Since Connecticut has been feeling like Arendelle these days my whole family has a bad case of cabin fever. We decided to bundle everyone up and head outdoors to enjoy some free winter fun. 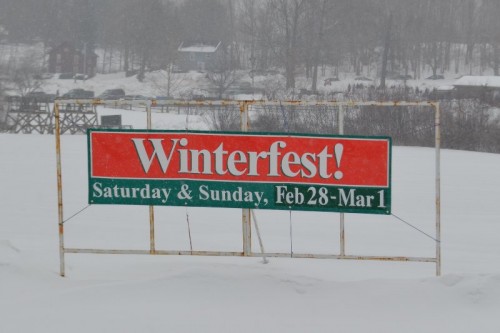 I’ve never been to WinterFest before so I wasn’t sure what to expect. We’ve had a lot of fun at their activities in the past so I had high expectations that WinterFest would be equally as much fun.

I knew that this was going to be a popular event so I made sure to get there early. We made it to Lyman Orchards by 10 am and the parking lot was quickly filling up. There were also shuttles available for people who arrived after the parking lots close by were filled up.

TIP: We debated bringing along the double stroller for our 3-year-olds and decided against it. The longest walk was from the car to the deck. After that, the double stroller would have been difficult to navigate through the crowds of people. If your little ones could handle the walk, I’d leave the stroller behind. 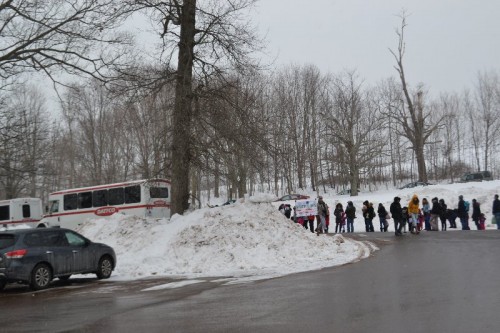 The line to get back on the shuttles.

This year’s theme for WinterFest was the ever-popular Frozen. The main attraction was the sing-along with Anna and Elsa followed by a meet and greet. Our first stop was to pick up a free ticket for the meet and greet. Tickets were limited so it was good that we got there early.

We had about 45 minutes to kill before the sing-along so we decided to explore the Apple Barrel store for some treats. The store was filled with their usual pies, cookies, produce, and store-made food. They also had samples throughout the store. We decided to grab a few sweets from the bakery section including apple cider donuts, maple apple croissant, and a maple glazed cider donut topped with bacon. Yum! 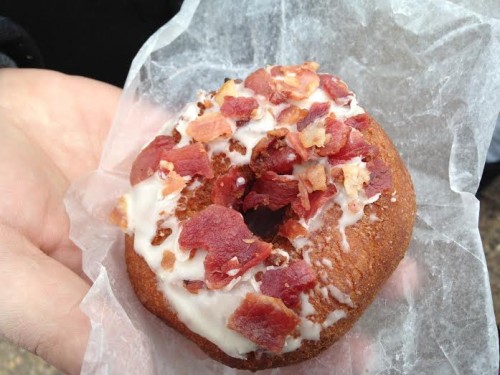 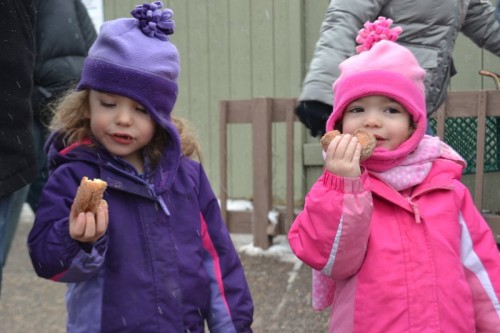 People started lining up for the sing-along about a half hour before the show. There was a roped off area for children to sit and enjoy the show. My girls observed from the comfort of our arms since there were A LOT of people around. They love the characters (they even dressed up like Anna and Elsa for Halloween) but I knew they would be a little too timid to sit close to the “stage.”

Anna and Elsa sang three of the most popular songs from the movie, including Let It Go. Olaf also made an appearance and was dancing and waving at all the kids. The singing lasted around 15 minutes.

After the songs, they started calling up ten numbers at a time to come take pictures with Anna, Elsa and Olaf. Our ticket number was 132 so we knew it would be a while before it was called. We decided to head into the store to defrost. I was really surprised that there weren’t portable heaters around to stay warm. The only way to get warm was to go inside the store.

TIP: I’ve learned the hard way that I should probably bundle my kids up in their full snowsuits when we’re planning outdoor activities in the winter. It’s a toss up between being cold or walking kind of funny. I guess you pick your battles. 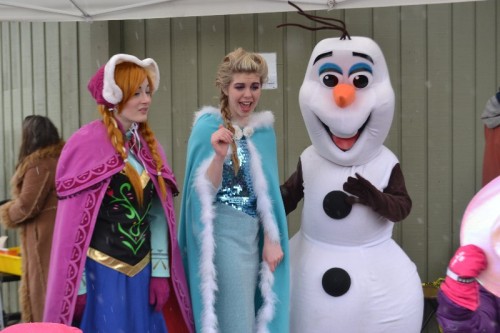 Once we had warmed up and sampled a few more treats in the store we decided to check out the rest of WinterFest. One of the things I was looking forward to the most was going on a sleigh ride. Unfortunately the deep snow forced them to cancel the sleigh rides. 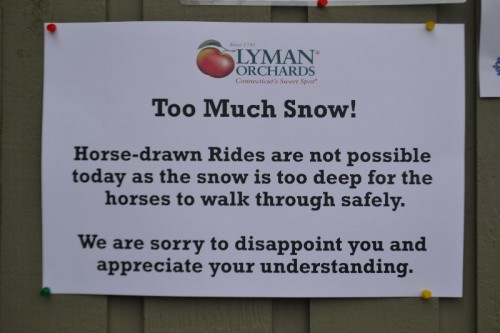 Luckily there were still plenty of activities to enjoy. 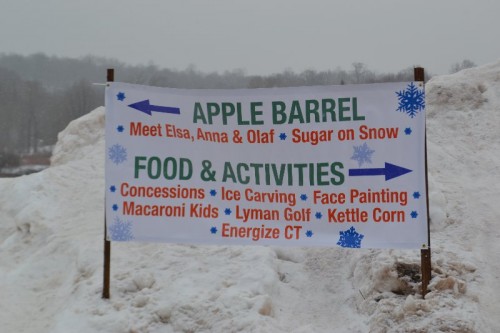 There was a large tent filled with live ice sculpture demonstrations. They were carving the trolls from Frozen. They had already made an ice replica of Sven and Kristoff’s sleigh. You were able to climb into the sleigh and take a picture. It was really amazing to think that everything was made with a chainsaw and blocks of ice. 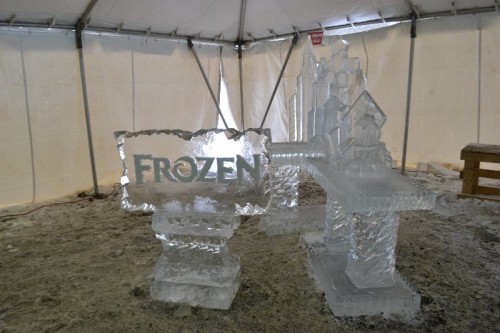 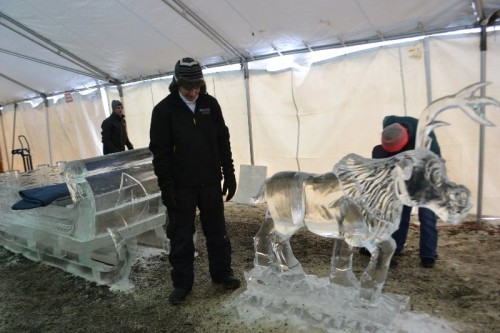 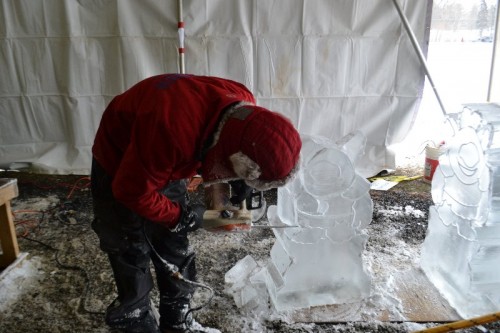 There was a little area for kids to make macaroni necklaces and another area for face painting. 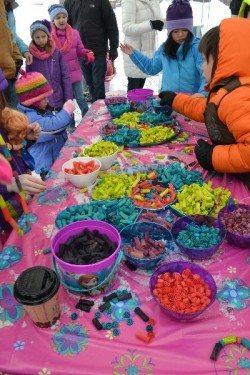 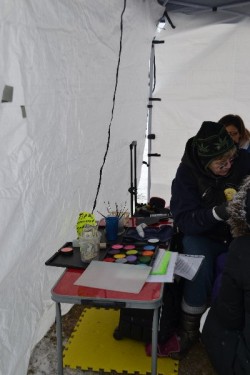 There were a few different areas to get food or a drink. 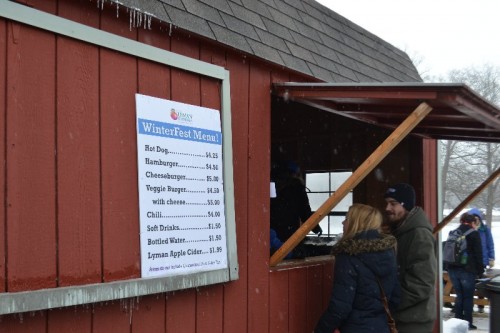 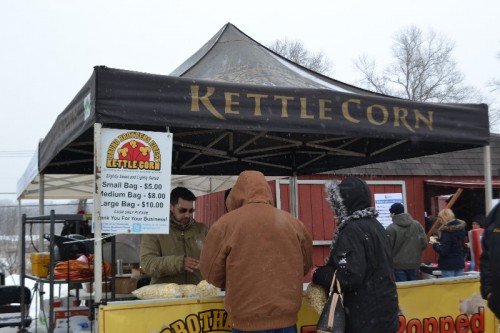 We decided to head back to the meet and greet to see if it was our turn. In an hour they only got to number 70. We stood and watched for about a half hour before our number was called. At this point the snow had picked up and people were starting to head back home which made the line move a lot faster.

I wasn’t sure how the girls would react being so close to the characters. I figured that I might have to be in the picture with them, but I was at least hoping to get a smile. Instead I got two terrified little girls who were screaming at the sight of their favorite characters. I’m sure the whole thing is a little overwhelming. 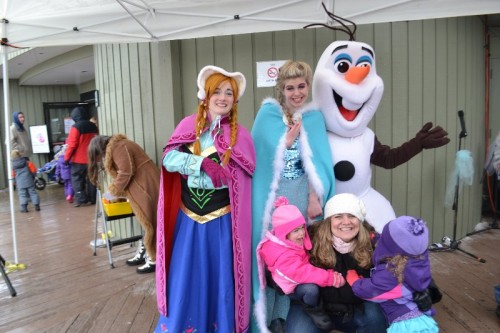 Despite the cold and snow, we had a nice time at WinterFest. It was nice to finally get out of the house for a free family-friendly event. We’ll definitely try to come back next year.