Last week I met up with my best friend Nicole and her adorable little girl, G, at Bruce Park Playground in Greenwich, CT. Nicole and I have been best friends ever since our freshman year in college, but unfortunately she lives over two hours away in New Jersey. We try our very hardest to get together as often as we can, but it’s gotten harder making the round trip to and from New Jersey. We have found that southern Fairfield County is about the halfway point for both of us. We recently just did a night out at a BYOB painting class in South Norwalk.

Before we had kids we used to check out the little boutiques and jewelry stores in downtown Greenwich. Things have become more difficult pushing a stroller and trying to avoid meltdowns, so we decided to plan a stress-free day trip at a playground instead. 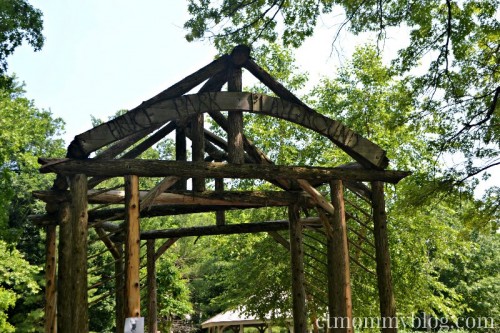 I had checked out Bruce Park Playground online so I already had high hopes when I arrived. The playground certainly did not disappoint. It’s beautiful. It’s set on a large piece of property with mature trees all around. There is even the view of the water in the distance. 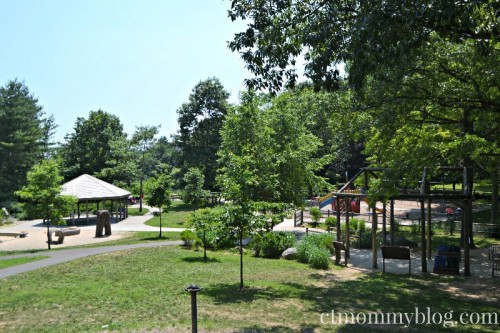 The playground is divided into two main areas: toddlers and bigger kids. Since our little ones are all under three we decided to set up camp in the toddler area under some shady trees. We brought a large quilt and enjoyed our picnic lunch before playing. There was also a small pavilion and picnic tables with a water view outside the gated toddler area. 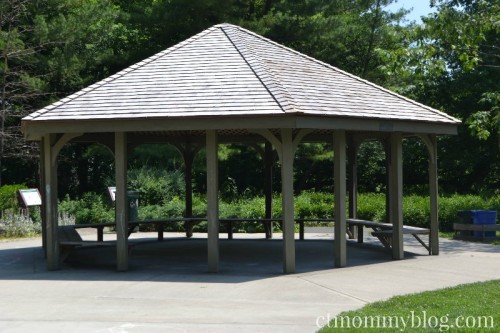 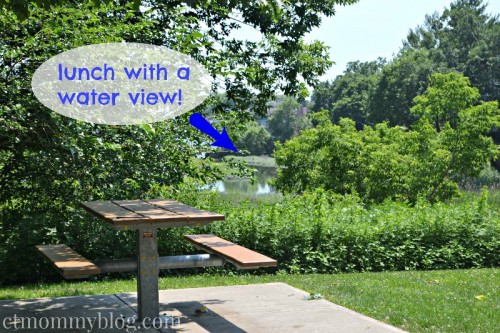 The toddler area followed a sailing theme. The large playscape was in the shape of a boat complete with portholes, captain’s wheels, and a hammock. 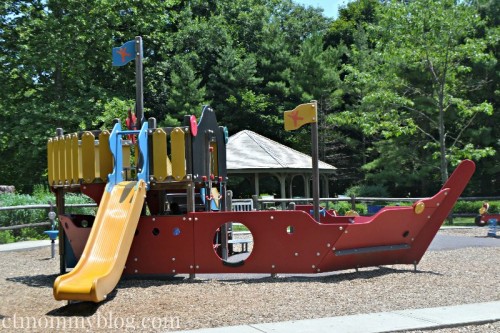 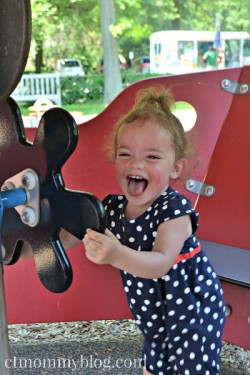 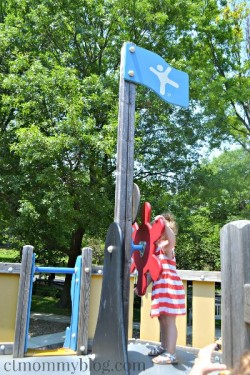 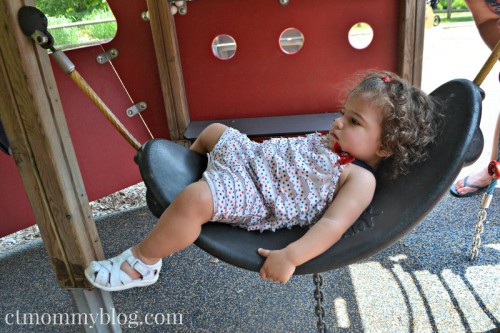 We went to the park in the late morning and the sun was beating down on the equipment, so the slide and swings were off limits. Thankfully there was still plenty of entertainment for our little people to enjoy. 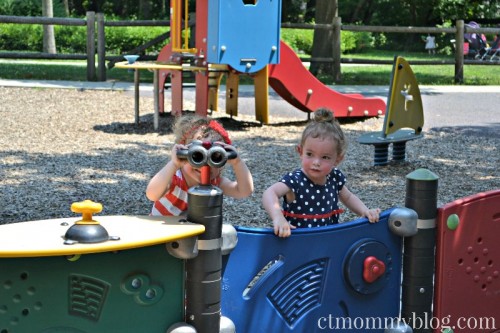 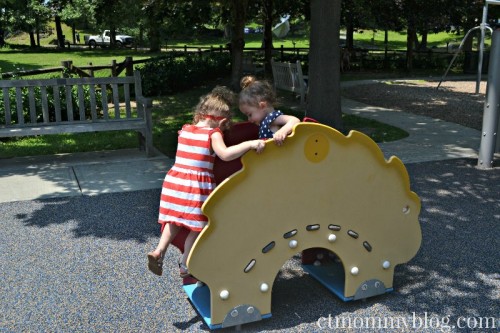 Around 1:30 most of the people at the park had cleared out and headed home for a nap. We decided to take advantage of the time and explored the rest of the playground since we knew our girls could enjoy a nap on their long ride home.

The section of the park designated for the big kids was much shadier than the toddler play area. We found that our little ones still had a great time exploring the upper level even though it was intended for older children. There were hollow “tree” tunnels that they could run through, a sand pit, and rock wall. There were also ramps on the play equipment. I was able to wheel Andrew in his stroller up the ramp to keep an eye on the girls playing on the playscape. I found that the most unique feature of the park were the slides built into the ground. Where was that when I was a kid? 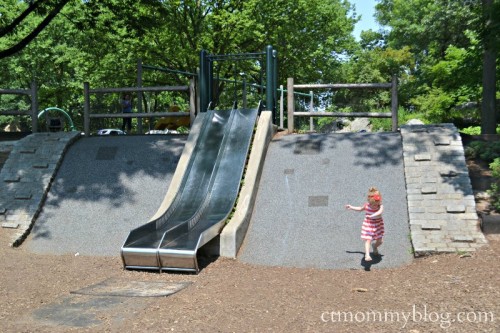 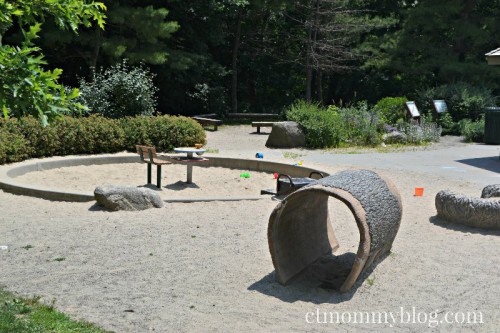 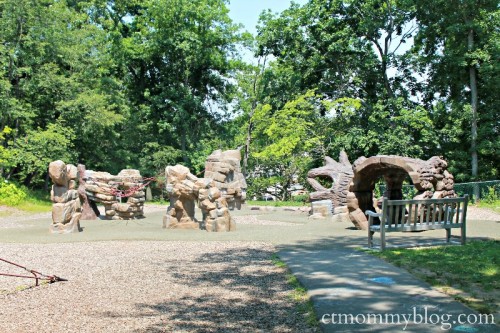 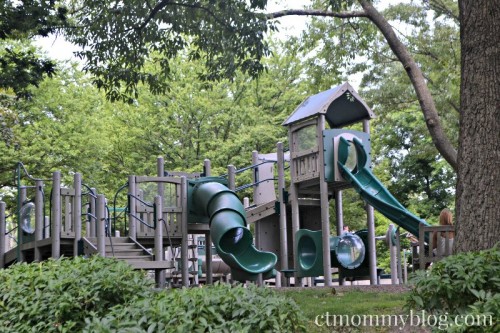 Before heading home, we decided to get some ice cream from the truck that had been parked there all day. We cooled down on some shady benches in the toddler area and finally got a picture of all four babies together. We had a great time at Bruce Park Playground. I cansee this being our “go to” spot as our children grow up together. 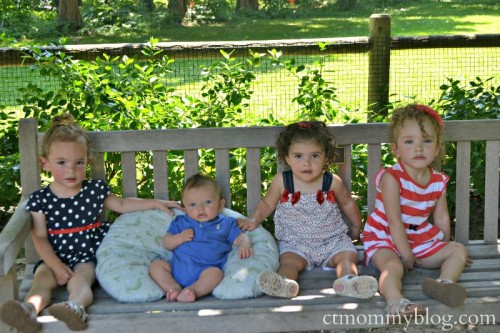 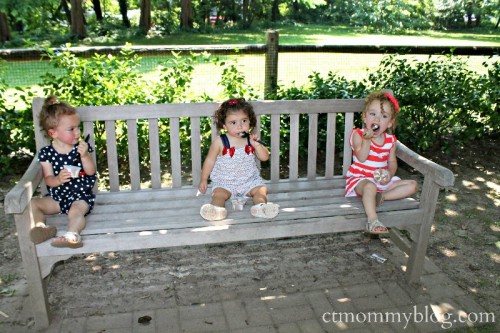